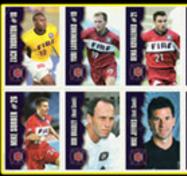 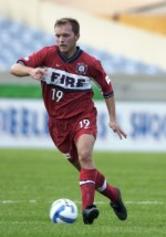 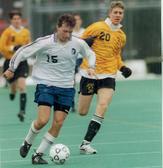 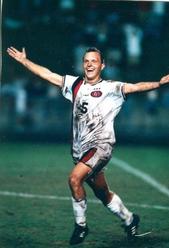 Early Years
Yuri was born in Kyiv, Ukraine and remembers watching a soccer game while sitting on his father's lap at the age of 4.  That memory is one of many that sums up his father's prominent role in developing his son's passion for the game. At the age of 7 Yuri tried out for the '77 team of the Dynamo Kyiv Youth Academy and was selected out of over 1000 players.

Many sessions and 7 years later Yuri was one of only 2 players remaining on the team that had constantly changed players for the better ones coming from all over the country. Yuri's coaches at the Dynamo Kyiv academy included Vladimir Onischenko - a former Dynamo great that won the European Cup Winners Cup (equivalent to today's Champions League or UEFA Cup), and Viktor Kondratov - another former Dynamo player who is currently an assistant head coach for the senior Dynamo Kyiv squad.

Yuri credits his years spent at the Dynamo Kyiv Academy as the foundation for all his knowledge concerning playing and coaching the game of soccer.

Coming to America
In 1990 Yuri's Dynamo team played in a tournament in Italy where two teams from Rochester were also playing.  The Rochester teams then decided to host a tournament to which they invited the Dynamo team.  Many American families hosted the foreign players during the tournament and enjoyed them so much they requested the same players when they returned to Rochester the following year for a month of training and exhibition games.  Some of the families invited some of the players to stay with them and attend school.  It was an opportunity that Yuri took advantage of and at the age of 14 he moved to Chili in January of 1992.Yuri attended Gates Chili High School and as a freshman joined the Varsity soccer team.  In those four years the team won the Section V championship  three times, went to the state Final Four three times and were state co-champions in 1995.  Yuri's  personal rewards included Monroe County Player of the Year honors and multiple All-State and All Greater Rochester selections.  Yuri finished his high school career as the all time assists leader for Monroe County and the all time points leader for Gates Chili.

College Years - Indiana University
Yuri was recruited by many Division I colleges but ended up choosing, what is arguably the best soccer school in the country, Indiana University.  Under the guidance of a coaching staff that consisted of legendary coach Jerry Yeagley, and his assistants Mike Freitag and John Trask, Yuri continued to develop his soccer pedigree.  Coach Yeagley has since retired as the winningest coach in Division I history and a Hall of Fame member.  Coach Freitag has taken over the tradition of excellence at Indiana and has since won another national championship.  Coach Trask, after a few years as an assistant in MLS, has quickly built a powerhouse program at the University of Illinois-Chicago.

It is no surprise that under such exceptional tutelage Yuri was able to lead the team to 2 NCAA titles while scoring the game winning goal in each of the National Finals.  The Big Ten title was an expectation at Indiana as Yuri never lost a Big Ten match in four years of competition.  Yuri ended his college career with numerous all time scoring records including being second on the all time assists leader board at Indiana University.

Yuri also excelled in the classroom earning multiple Academic All Big Ten honors and graduating from IU in three and a half years with a major in Liberal Arts and a minor in General Business.

Professional Career
Yuri was signed by MLS in January of 2000 and later was drafted by the Chicago Fire.  While with Chicago Yuri won the US Open Cup and was an MLS finalist participant.  The former US Men's National Team coach and current coach of the Swansea City in the English Premier League, Bob Bradley, was Yuri's coach during his time with the Fire.  Yuri credits training and playing with players such as Hristo Stoitchkov ('94 World Player of the Year) and Peter Novak (BundesLiga Player of the Year) for his development at the professional level.

In May of 2001 Yuri signed with the Milwaukee Rampage and spent the rest of the season there before returning home to Rochester in 2002 where he signed with the Rhinos.  While at Rochester Yuri helped the team earn two divisional championships.

In the summer of 2004 Yuri signed with the Montreal Impact where he won the A-League Championship that same season.

Personal
Yuri serves as the director of coaching for the Dynamo Elite Soccer Academy and Webster Soccer Association where he is responsible for selecting over 40 coaches, running tryouts for the Premier and Travel Programs, and training coaches through a series of monthly coaches sessions covering tactics, techniques, field play and conditioning.  Yuri also implements technical player development plans during his field sessions with the teams.

In 2004 Yuri earned an MBA from Rochester Institute of Technology and also served as an adjunct professor at St. John Fisher College.Currently Yuri and his wife, Meghan, live in Webster with their three children Isa, Vlad and Declan.